Sunjang baduk (Korean: 순장바둑) is a variant of the game go (known as baduk in Korean) played in Korea which dates to the 16th century. It became obscure in the 1950s when it was largely replaced by modern go due to Japanese influence. There are around 45 surviving game records of Sunjang baduk, mostly from the 1880s. The oldest known game record was published in the Chosun Ilbo newspaper on March 1937, although the game was played much earlier. The game is between No Sa-ch'o and Ch'ae Keuk-mun. Sunjang baduk is played on a 19x19 board with 17 marked points which are used as indicators. The first 16 stones are put in a preset pattern on the marked points and black must make their first move on the Tengen (the center point on the board). Due to the prescribed nature of the opening, games tend to be aggressive which leads to fierce middle game fighting.

The rules of play are similar to that of modern go. Traditionally, there was no komi but in later games it was introduced. Ko and Seki are treated the same as in modern go. Besides the initial position there are also differences in the scoring rules. To count the game, all neutral intersections (dame) must be filled in. Then, all dead stones (prisoners) and all stones not forming the outside boundaries are removed. The respective territories (with prisoners ignored and komi added if applicable) are compared to determine the winner. Like in go, handicaps exist to even the chances of winning between players of differing strength. The handicaps are different because of the initial setup.

Sunjang baduk is occasionally played in tournaments, mostly by go players interested in Sunjang baduk as a go variant. The British Go Association hosted an online tournament in 2007. As part of the 2012 European Go Congress, there was a Sunjang baduk tournament as a sub event. The winner was Jonas Welticke. 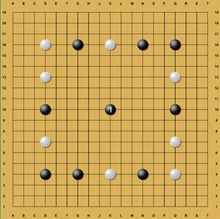 Go was introduced to Korea from China. According to the book, Samguk Yusa, king Gaeru of Baekje played go with a Buddhist monk in the fifth century. This is the earliest known reference to go in Korea. Classical Chinese go was played with the diagonal placement of two black stones and two white stones on the four star points in the corners. It is likely that Koreans played go in this form until it developed into Sunjang baduk in the 16th century. In the early 20th century, the top ten strongest players ranged from about 4 dan amateur to 2 dan professional in terms of strength. From 1910-1945, Korea was a Japanese colony. The similarity between Sunjang Baduk and modern go as well as Japanese influence encouraged players to switch to the modern game. The strength and fame of visiting Japanese professional go players encouraged Koreans to abandon Sunjang baduk. This was supported by the father of modern Korean go, Cho Nam-ch'eol, who established close links to Japan by studying go there.