Kifu (棋譜) is the Japanese term for a game record for a game of Go or shogi. Kifu is traditionally used to record games on a grid diagram, marking the plays on the points by numbers. 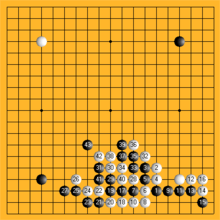 A recording of Wang Jixin's game v. Yushan Laoyu (Ancient China, Tang Dynasty). Expand for a clearer view. Note that the moves are numbered consecutively. The numbering here starts after the first four (unnumbered) moves have been played.

A large corpus - many thousands of games - of kifu records from the Edo period has survived. Quite a low proportion was published in book form; strong players used to make their own copies by hand of games to study. This accounts for one feature of the records passed down: they often omit much of the endgame, since for a strong player reconstructing the smaller endgame plays is routine. This explains the survival of some games in different versions, and possible discrepancies in the final margin.

The early Western Go players found the method of kifu inconvenient, probably because as chess players they were more familiar with algebraic notation, and because as new players they found it difficult to locate moves. But they quickly discovered the advantages of kifu-style notation - as much as an entire game can be visually displayed in one diagram - and now virtually all Go books and magazines use some modification of the kifu to display games, variations and problems. While a typical piece of chess literature is in algebraic notation punctuated by occasional diagrams, Go literature mostly consists of diagrams with a sequence of plays marked, and prose commentary.

The pioneering European player Oskar Korschelt disliked kifu because nineteenth century kifu always used Chinese numerals, which are indeed difficult to read unless one is familiar with them. Numbering in that style continued until 1945, having been popular in the 1930s on the basis of nationalist feeling in Japan. (Hindu-Arabic numerals were also used.) In Japanese Go books, when unoccupied points of the board are mentioned in the commentary, they are usually labelled by hiragana (in iroha order) to this day.

The playing-through on a Go board of a game record given as a kifu on a single diagram is still a little taxing for a beginner player, because the next move has to be found. An amateur dan player would expect to play through a game of normal length in around 20 minutes. A player of professional level would take ten minutes, and could easily sight-read a professional game from the kifu. Stronger players can locate plays more easily because they often know where the next move is likely to be found.

In most games, a small number of plays are at intersections that were previously occupied (this happens, for example, during a ko fight). Annotations by the side of the kifu give this information, usually in the form '57 at 51' or something comparable. Game records are usually completed by information on the players' ranks, the date and competition data, location, winning player and margin of victory.

Many of the most important games are now available in machine-readable form, using one of a small number of Go file formats. This has great advantages in terms of ease of playing through games, and lends itself well to database storage and archival. The common opinion is that playing games through on a board (rather than computer monitor) from a printed record is a qualitatively different experience.

There is no other universally-recognised notation comparable to algebraic chess notation for Go. There are several methods in use, including

Since the Go board is symmetrical with no particular sides, it makes no difference which corner is used as the reference point from which to count coordinates.