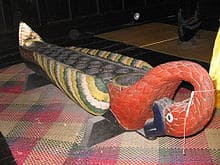 A swan-shaped Malaysian congkak in the National Museum of Malaysia

Congkak, which is often considered a game for girls, has simple rules that allow the boards to have different numbers of holes. Congkak boards are often made of teak or mahogany wood are often elaborately carved into various shapes such as naga or birds.

The word congkak is believed to originate from old Malay "congak", meaning "mental calculation" which is mainly practiced in this game. It is regarded that an efficient player who mentally calculates a few steps in advance will have an advantage in collecting points to win the game.

The word congkak or congklak also means cowrie shells, used in the game.

A boat-shaped dakon, a name for Congkak in Java which is actually a name for a bronze-iron age rock tool

The oldest mancala game boards were found in a ruined fort of Roman Egypt and date back to the 4th century AD. The game was likely introduced to Southeast Asia by Indian or Arab traders in the 15th century.

It is believed to have spread throughout Malay world through merchants via Malacca, an important trading post at that time. In the early days, it was thought that this game was for the king and family and palace residents, however later it spread to the general population of the kingdom. Beside the Malays, the Indian Peranakan also enjoy playing Congkak.

In Java, the term "dakon stone" refers to the similarly pitmarked stones from the bronze-iron age period of Indonesia. These stones have rows of 4 or 5 cup-shaped holes and two holes at each end, a formation which has much in common with that of the similarly named game in Java. This prehistoric dakon stones is unrelated to the game and were probably employed in ceremonies to propitiate ancestors. Such stones can be found around Java.

The second series Malaysian Ringgit 10 sen coin has a Congkak board on the reverse in recognition of the long history of congkak in Malaysia.

A total of 98 pieces are used in the two sets of seven board version. In Southeast Asia, cowrie shells and tamarind seeds are the most common. Seven seeds are placed in each small hole called 'houses' except for the players' storehouse. The objective of the game is to capture more seeds in the storehouse than one's opponent.

The main method of play has rules as described below.

Both players begin simultaneously by scooping up all the seeds in any house on their side. Each drops a seed into the next house and continues clockwise depositing one seed into every house thereafter. A player drops a seed into his storehouse each time he passes it but does not deposit any into his opponent's storehouse.

How the game continues, depends on where the last seed of each scoop is deposited.

If the seed drops into the player’s own storehouse: the player scoops up the seeds from any of his houses and distributes them in the houses round the board but not in his opponent's storehouse.

If the seed drops into a house (on either side of the board) containing seed: The player scoops up all the seeds in that house and continues distributing them as described above.

If the seed drops into the player’s house which is without seeds: The player is entitled to collect the seeds in his opponent's house directly opposite his own. These seeds collected from his opponent's house together with his last seed are deposited in his own storehouse. If the opponent's 'house' opposite his own is empty, he deposits only his last seed in his own storehouse. He forfeits his turn and stops playing. It is the opponent's turn now to distribute the seeds.

The first round ends when a player has no more seeds in his house. The remaining seeds are awarded to his opponent.

The loser gets to start the second round. Play is continued as before but players will bypass 'burnt houses' for instance no seeds are to be dropped into these houses. If a seed is accidentally dropped into a 'burnt house', it is confiscated and stored in the opponent's 'storehouse'.

Play continues until one player loses all his 'houses' or concedes defeat.