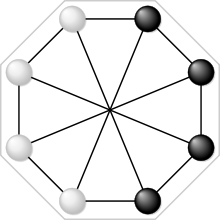 Mū tōrere is a board game played mainly by the Māori people from the east coast of New Zealand’s North Island. It is one of two board games that the Māori people are known to have played before their country became part of the British Empire.

Each player controls four counters or perepere. They are initially placed on the board at the kewai - the eight end-points of the star. At the beginning of the game the middle point, or pūtahi, is empty.

Players move one of their counters per turn to an empty point. Players can move only to an adjacent kewai, and can move to the pūtahi only when the moved counter is adjacent to an opponent's counter. The player who blocks all the opponent's counters from moving is the winner.