Morabaraba is a traditional two-player strategy board game played in South Africa, Botswana and Lesotho. The game is also known as Mlabalaba, Mmela (in Setswana), Muravava, Umlabalaba. The game is similar to Twelve Men's Morris, a variation on the Roman board game Nine Men's Morris.

While some believe that Morabaraba was introduced to southern Africa by British settlers, Morris variants exist in many parts of the world; e.g. India (Char Bhar), Ghana (Achi), Kenya (Shisimia), Somalia (Shax), Zimbabwe (Tsoro Yemutwelve), the Philippines (Tapatan) and Mongolia (Gurgaldaj). It is claimed that Morabaraba boards carved in rock are dated to be at least 800 years old, which would exclude a European origin. However, many rock art images do not actually show Morabaraba, but the mancala game of Moruba (i.e. rows of cupules).

Morabaraba is today most popular amongst rural African youth in southern Africa. In South Africa it is also commonly known by the Xhosa form of the name Umlabalaba. In the traditional European game the counters are commonly referred to as "men", but in the South African game the counters are referred to as "cows", the game being particularly popular amongst youth who herd cattle.

According to the Oxford English Dictionary, the term "Morabaraba" is derived from the Southern Sotho moraba-raba, meaning "mill" or to "go round in a circle".

Morabaraba is accessible and easy to learn, and games can be played quickly, but the strategic and tactical aspects of the game run deep. While Morabaraba may be played on specially-produced boards (or computer software), it is simple enough that a board can easily be scratched on a stone or into sand, with coins or pebbles (or whatever comes to hand) used as the pieces. The description below is compatible with Mind Sports South Africa's "Generally Accepted Rules".

There are three main phases to the game:

Mind Sports South Africa has invested a great deal of time and effort into the different versions of Morabaraba which have borne fruit by having leagues played throughout the country as well as having adopted a notation system similar to Nine Men's Morris.

The game is an official discipline of the Traditional World Games, which are held every five years. Tournaments were not just in South Africa, but also in Bangkok (Thailand), Melbourne (Australia), New Orleans (USA), Athens (Greece) and at the Epsom College in England. 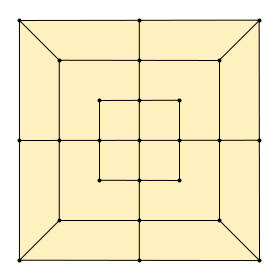 The board used for Sesotho variation of Morabaraba

This is the variation typically played by Sesotho speaking children in South Africa. It differs from the standard form in that the board does not have diagonals between the center points of its sides and there is an additional intersection in the center of the board to prevent a draw.

This is a European variation that uses the same board as Morabaraba but is played with eleven counters. This prevents a situation where the game can end in a draw in the placement phase.

The standard Welt-Mühlespiel-Dachverband notation for Nine Men's Morris works well for Morabaraba (see diagram). It is very similar to algebraic notation in chess. The board is laid out on a grid, with the columns in the grid being labelled a-g (from left to right), and rows in the grid being labelled from 1-7 (bottom to top). Each point is then referred to by its coordinate; for example, the top-left point in the middle (not inner) square is labelled b6. Moves are then formatted as in Chess or Drafts: placing a piece is denoted simply by the square where it is placed; moving a piece by the from and to squares (e.g. c5-d5); capturing by appending the captured piece to the move (e.g. c5-b6xe5 or c4xa1).