Evo: The Last Gasp of the Dinosaurs is a German-style board game for three to five players, designed by Philippe Keyaerts and published by Eurogames. The game won the GAMES Magazine award for Game of the year 2002 and was nominated for the Origins Award for Best Graphic Presentation of a Board Game 2000. The game went out of print in 2007, and a second edition was released in 2011. 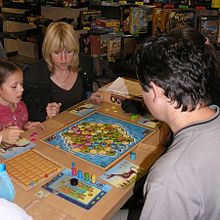 The main game board is made of two reversible sections; on each, the two sides contain differently-sized halves of a prehistoric island. The board can therefore be assembled in four ways:

The island itself is made up of hexes of four different terrain types - "Hot", "Warm", "Cool" and "Cold". The game also uses a separate board for marking the current climate and round number, another for players scoring and bidding progress, and each player has a board to mark their dinosaur's mutations. The players' scores are also used as money during bidding phases.

Players start with three Event cards, a stack of "dino" tokens several mutations: one "Egg", one "Leg", one "Tail", one "Horn", one "Fur" and one "Parasol". Each player places a dino token on their starting hex and a scoring marker on "10". Play proceeds through various phases:

Event cards can be used at various points to alter the game. The player with the most points when the game ends wins.

The simple strategy game at the core of Evo is made more interesting by the constantly changing climate. Positions which can be advantageous in one turn are often deadly a few turns later, so unlike many games where a winning player can come to dominate the game, the balance of power shifts frequently.

Unlike most German-style board games, in the first edition it is possible for a player to be eliminated if all his dino tokens are removed from the board. However, this is very rare in practice. In the new edition, player elimination has been prevented by allowing players who only have two dinosaurs to be invulnerable during survival and combat phases. One of the many new unique gene abilities increases this limit to three, allowing players doing poorly to remain competitive.