Chowka bhara (also spelt as Chowka Bara) is a two- or four-player board game from India. This game is an example of a partially observable system that involves an element of chance introduced by the roll of special dice and an element of strategy (the strategy being the pawn the player decides to move after the roll of the dice).

The game of Chowka Bhara is one of the oldest board games, still being played in certain parts of India. There are references of this game in some ancient Indian epics like the Mahabharata. This game has been traditionally played on a silk cloth-lined board and with 4 cowry shells, which are the special dice.

Chowka bhara normally has a 5x5 square and four players, but one can also increase the number of squares depending on the number of players to any odd number x odd number (say 11x11). Assuming the size of the board is NxN (with N being odd), then each player will have N-1 pawns. 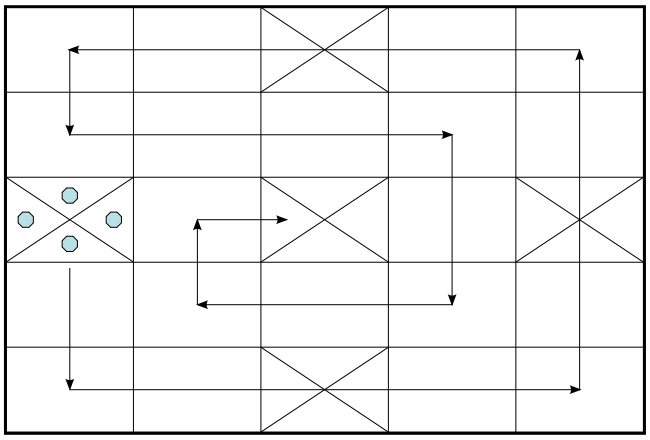 The 5x5 version looks as shown in the image - there will be four players each having four pawns, starting at different positions (say North, East, South, West). They will start from the four crossed squares at the outermost ring and each player takes a turn to roll the shells. The mouth of the shell is has a value of 1 and the other end of 0. However, if every shell shows a value of 0 (i.e. land on the other end), then the value of the roll is 8. Therefore, the possible values are 1, 2, 3, 4 and 8. If a player has cast the values 4 or 8, then he/she will get an additional turn. This may progress until that player gets a number other than 4 or 8 (namely 1, 2, or 3).

Depending on the number the player gets, he/she can move one (or more) of their pawns that many number of squares on the board. Each player has a fixed path to move his/her pawns, which is in an anti-clockwise direction. The path for Player 1 is given in the figure above. Each player must completely traverse the outer squares, before stepping into the inner squares.

Objective of the game

For a player to win, he/she must move all their pawns to the center square.

This game has several intricate rules which need to be followed. Although there are several variations of this game, the following rules are for the standard implementation.

1. A player casts the shells to determine the number of square his/her pawns can move. If a player has cast 1,2 or 3, then he/she needs to choose one of their pawns and move it that many squares along the path designated for that player. The player needs to be able to smartly choose a pawn to move, so that it optimizes his chance of winning the game. If a player has cast either a 4 or an 8, the player will have another turn to cast the dice. The player does not have to move any of his pawns until he has cast 1, 2, or 3.

For example if a player casts a 4, he will get another chance to roll the dice. If on the second turn he gets a 3, then the player can move one of his pawns 4 squares and one of his other pawns 3 squares. He can of course choose to move the same pawn (4+3) 7 squares if he wants to. This argument can be extended to the player getting 3 or more consecutive turns.

2. "Hit": Pawns of two different players cannot exist in the same square, other than a "Safe" square, which are marked with an X in the figure. For a 5x5 board this is simply the starting positions of each of the players and the center square. However, for higher dimension boards, more safe squares can be added symmetrically across the board.

So if the pawn of player X lands on the same square of a pawn of player Y, then player X has "hit" player Y. Player Y's pawn is returned to its starting square and this pawn needs to start over. For a player's pawn to progress into the inner squares, he should have "hit" at least one of his opponent's pawns. This condition is imposed on the player and not on his pawn. For example, even if one of the player's pawns has hit one of the opponent's, then all his other pawns will be eligible to enter the inner square. If it so happens that a player cannot move any of his pawns because he has not "hit" any of his opponents, then the player will lose that turn.

3. "Double": It is possible for a player to have two of his pawns in the same square. This is called a "double". If a player forms a double on the outer square, then it blocks the opponent's pawns behind him for one move; i.e. if an opponent's pawn crosses the double, then that move is voided and the opponent loses a turn. However, on the next turn for the same opponent, his pawn can go past (or "cross") the double. This rule is applicable for every opponent of the player in the game. This rule is not valid once the double is formed on the inner squares. For the player forming the double, there are two choices on his subsequent moves. He can "break" the double by moving only one of the pawns in it, or keep the double and advance the pawns together. In case a player has got multiple turns (as he may have thrown 4s and 8s), he can treat the double as one pawn and make it move to one of the values on the dice.

5. Reaching the central square: A pawn needs to reach the central square exactly. For example, if a pawn is 3 squares away from the center and the player throws a 4, then that pawn cannot be moved. If that is the only pawn left for the player to move (which may be because of a variety of reasons such as being blocked by double, or by virtue of being the last pawn left), the player will lose his turn.