Blokus ( ) is an abstract strategy board game for two to four players, invented by Bernard Tavitian and first released in 2000 by Sekkoïa, a French company. It has won several awards, including the Mensa Select award and the 2004 Teacher's Choice Award. In 2009, the game was sold to Mattel. 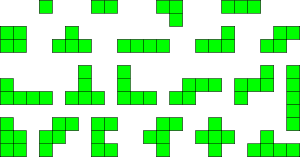 The shapes of the 21 Blokus tiles.

The game is played on a square board divided into 20 rows and 20 columns, for a total of 400 squares. There are a total of 84 game tiles, organized into 21 shapes in each of four colors: blue, yellow, red, and green. The 21 shapes are based on free polyominoes of from one to five squares (one monomino, one domino, two trominoes/triominoes, five tetrominoes, and 12 pentominoes).

The standard rules of play for all variations of the game are as follows:

When a game ends, the score is based on the number of squares in each player's pieces on the board (e.g. a tetromino is worth 4 points). If a player played all of his or her pieces, he or she gets a bonus score of +20 points if the last piece played was a monomino, +15 points otherwise.

Sekkoïa and its distributors manufacture four additional versions of the game.

Blokus Duo is for two players only, and uses a smaller (14x14) board; the piece colors are purple and orange. The two starting squares are placed, not in the corner (as in the original Blokus game) but nearer to the centre. This makes a crucial difference in the flavour of the game, because players' pieces may (and usually do) touch after the first move. Even more than with the original game, Blokus Duo is an offence-centred game; it is also a much purer strategy game than the four-player game, since one is not in danger of getting ganged up on by three other players (as sometimes happens with the four-player version). 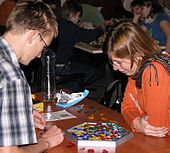 Blokus Trigon uses pieces made up of triangles rather than squares (polyiamonds), and is played on a hexagonal board, a version optimized for three players but can be played with 2, 3, or 4 players. The same rules apply, meaning that 2 edges cannot touch; however, as it is isometric, a corner touching an edge is possible.

Blokus Giant is a larger version, with the game board being about 570 mm (22 in) square.

Blokus Junior is targeted at younger children. Like Blokus Duo, it is played by two players on a 14x14 board but it uses only a subset of the pieces that have a supposedly simpler shape. There are 12 unique pieces. Each player gets two of each kind, 24 in total. The game also comes with a set of sheets with single-player puzzles, which show positions in which the player needs to connect two pieces following standard Blokus rules.

Blokus 3D, originally marketed in a Mayan theme as Rumis, uses pieces made up of unit cubes, in every permutation of three and four cubes in three dimensions. Stefan Kögl created Rumis independently from Bernard Tavitian, and are not related. However Rumis was rebranded into Blokus 3D since Blokus brand was stronger than Rumis. There is also a major rule change; instead of being required to place pieces so they touch corner-to-corner, a piece must be placed such that it touches a face of another piece of the same color. Also, a player placing a piece cannot do so if it would create any empty space underneath any part of the piece. The object is to build one of four different structures, each with its own placement limitations: the Tower, Wall, Steps, and Pyramid. Players attempt to place their blocks such that at the end of the game, when the structure is viewed from above, their color has the most squares showing.

For some time, there was an official online version of Blokus where visitors could play with opponents all over the world. Mattel suspended the online game on May 18, 2012, stating it did not meet its playability standards. It is now possible to play blokus online at Pentolla.com.

The PlayStation Portable has Blokus Portable: Steambot Championship, which features characters from Steambot Chronicles playing the Classic, Travel, and Duo versions of the game.

A Gameloft developed version of Blokus was released for iPhone, iPod touch, and iPad in April 2010, featuring the Classic and Duo versions of the game, local and online multiplayer gameplay, and single player tournament mode. A clone named Quadrus, is available since January 2014.

As of January 2014, the Gameloft version of Blokus is no longer available from the App Store. Currently, the officially licensed Blokus app is developed by Magmic, and is available for iPhone, iPod touch, and iPad. This version includes solo play and multiplayer options, integrating the user's Facebook and Game Center friends and allowing them to compete on a tournament leader-board.

There is also some open source software based on the same concept of polyominoes as blokus does, for example Blokish, Blockem, Freebloks or Pentobi for desktop and Freebloks or Blokish for Android smartphones.