Games available in most casinos are commonly called casino games. In a casino game, the players gamble casino chips on various possible random outcomes or combinations of outcomes. Casino games are available in online casinos, where permitted by law. Casino games can also be played outside of casinos for entertainment purposes, some on machines that simulate gambling. 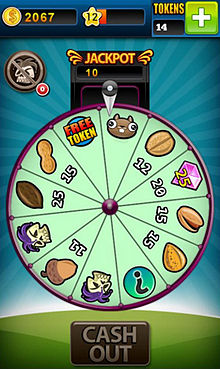 Casino games generally provide a predictable long-term advantage to the casino, or "house", while offering the player the possibility of a large short-term payout. Some casino games have a skill element, where the player makes decisions; such games are called "random with a tactical element". While it is possible through skillful play to minimize the house advantage, it is extremely rare that a player has sufficient skill to completely eliminate his inherent long-term disadvantage (the house edge (HE) or house vigorish) in a casino game. Such a skill set would involve years of training, an extraordinary memory and numeracy, and/or acute visual or even aural observation, as in the case of wheel clocking in roulette or other examples of advantage play.

The player's disadvantage is a result of the casino not paying winning wagers according to the game's "true odds", which are the payouts that would be expected considering the odds of a wager either winning or losing. For example, if a game is played by wagering on the number that would result from the roll of one die, true odds would be 5 times the amount wagered since there is a 1 in 6 chance of any single number appearing, assuming that you get the original amount wagered back. However, the casino may only pay 4 times the amount wagered for a winning wager.

The house edge or vigorish is defined as the casino profit expressed as the percentage of the player's original bet. (In games such as blackjack or Spanish 21, the final bet may be several times the original bet, if the player double and splits.)

Poker has become one of the most popular games played in the casino. It is a game of skill and the only game where the players are competing against each other and not the house. There are several variations of poker that are played in casino card rooms.

The calculation of the roulette house edge was a trivial exercise; for other games, this is not usually the case. Combinatorial analysis and/or computer simulation is necessary to complete the task.

In games which have a skill element, such as blackjack or Spanish 21, the house edge is defined as the house advantage from optimal play (without the use of advanced techniques such as card counting), on the first hand of the shoe (the container that holds the cards). The set of the optimal plays for all possible hands is known as "basic strategy" and is highly dependent on the specific rules and even the number of decks used. Good blackjack and Spanish 21 games have house edges below 0.5%.

Traditionally, the majority of casinos have refused to reveal the house edge information for their slots games and due to the unknown number of symbols and weightings of the reels, in most cases this is much more difficult to calculate than for other casino games. However, due to some online properties revealing this information and some independent research conducted by Michael Shackleford in the offline sector, this pattern is slowly changing.

The luck factor in a casino game is quantified using standard deviations (SD). The standard deviation of a simple game like roulette can be calculated using the binomial distribution. In the binomial distribution, SD = sqrt (npq ), where n = number of rounds played, p = probability of winning, and q = probability of losing. The binomial distribution assumes a result of 1 unit for a win, and 0 units for a loss, rather than -1 units for a loss, which doubles the range of possible outcomes. Furthermore, if we flat bet at 10 units per round instead of 1 unit, the range of possible outcomes increases 10 fold.

It is important for a casino to know both the house edge and variance for all of their games. The house edge tells them what kind of profit they will make as percentage of turnover, and the variance tells them how much they need in the way of cash reserves. The mathematicians and computer programmers that do this kind of work are called gaming mathematicians and gaming analysts. Casinos do not have in-house expertise in this field, so outsource their requirements to experts in the gaming analysis field.