The 40th Chess Olympiad, organised by the Fédération Internationale des Échecs and comprising an open and women's tournament, as well as several events designed to promote the game of chess, took place in Istanbul, Turkey, from 27 August to 10 September 2012. The city also hosted the event in 2000.

More than 1,700 players and team captains participated, including 157 teams in the open and 127 teams in the women's section. The main competitive events were held at the Istanbul Expo Center. The Chief Arbiter of the event was Greece's International Arbiter Panagiotis Nikolopoulos.

Istanbul's hosting the 34th Chess Olympiad in 2000 sparked a "Chess boom" in the country. Turkey has since hosted more than 100 international chess tournaments, including European Championships, World Youth Championships, and Youth Chess Olympiads. Membership in the Turkish Chess Federation has risen from 3,000 to about 250,000 in only eight years. Ali Nihat Yazıcı, President of the Turkish Chess Federation, is credited with triggering most of the activities towards this intensive chess development in the country. He was later elected a Vice-President of FIDE. 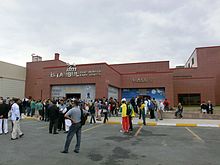 The Istanbul Expo Center, the location of the tournament

The tournament was played in a Swiss system format. The time control for every single game was 90 minutes per 40 moves, with addition of 30 seconds per move, and 30 minutes after the 40th move. It was allowed once again for a player to offer a draw at any time during the game. A total of 11 rounds were played, in which every team played with four of their players against another team. Every team was allowed to nominate one reserve player.

Teams were ranked according to the match points won in every round. In case of same number of match points by one or more teams, the tie-breaker is decided by applying: 1. The Sonneborn-Berger system; 2. Total game points scored; 3. Sum of the match points of the opponents, excluding the lowest one.

Armenia, led by world number 2 Levon Aronian, won their third title after previously winning the event in 2006 and 2008. The Russian team were once again the clear favourites before the Olympiad but failed to win the gold for the fifth consecutive time and occupied the second place, while the Ukrainian team as a titleholder finished in the third place. Three teams, China, Armenia and Russia, were tied on the top of the standings before the last round of the event with China winning the tie-breaker. But in that final round the Chinese players had to play against the Ukraine, led by Vassily Ivanchuk, while Armenians played against Hungary and Russia played against Germany. The Armenians and Russians won their final matches but Ukraine edged the leading Chinese team 3-1 preventing them from winning a medal. The Armenian and Russian teams had the same match points in the final standings but the Armenians won the tie-breaker taking their third title. Ukraine, thanks to the win in the final round against China, took the bronze medal.

All board prizes were given out according to performance ratings. Shakhriyar Mamedyarov on the third board had the best performance of all players in the tournament: 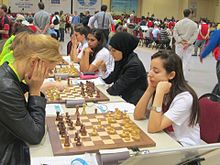 Chess match in the women's event

Russia took the gold medal in the women's section to win their second consecutive title. China, led by the current World Chess Champion Hou Yifan took the second place, while Ukraine finished in third place overall. The medal-winning teams were also the only undefeated teams on the tournament. China and Russia entered the final round against Bulgaria and Kazakhstan respectively tied on the first place with China winning the tie-breaker. The Russian team scored an easy win 4-0 against the Kazakh team, while China faced some problems and edged Bulgaria by a minimum winning score of 2.5-1.5. Both teams were tied again in the final standings, but this time it was Russia winning the tie-breaker to secure their second consecutive title. Ukraine won their last match against Germany 3.5-0.5 and thus won the bronze medal.

All board prizes were given out according to performance ratings. Nadezhda Kosintseva on third board had the best performance of all players in the tournament:

The Nona Gaprindashvili Trophy is awarded to the nation that has the highest total number of match points in the open and women's divisions combined. Where two or more teams are tied, they are ordered by the same tie breakers as in the two separate events.

On 24 November 2010, New York Times published an article concerning the possibilities that the Turkish Chess Federation has paid the voters amount of $120,000 in order to win the bids to organize the Olympiad. In the financial report published on the official website of the Turkish Chess Federation there was a footnote, which translated into English points on the allocation of these costs for stand, souvenirs, lobbying activities, as well as accommodation, transportation and food for some of the FIDE delegates to vote for the city. The official answer of the Turkish Chess Federation denied the claim and mentioned that the sum spent is not very big when bidding to host an Olympiad. It was also clarified in the response that the costs were allocated to pay for the Turkish delegates at the FIDE Congress in Dresden, and the expenses documented by invoices testify that no money was given to any of the FIDE delegates and none of the expenses were reimbursed.

In June 2012, Ali Nihat Yazıcı, President of the Turkish Chess Federation, announced that no arbiters from Germany, England, France, Georgia, Switzerland, Ukraine and the United States would be accepted for the event because of the involvement of those countries in launching or supporting court cases against FIDE, causing financial problems and a loss of distributable income for worldwide chess development. A few days later, the English Chess Federation sent a protest letter to FIDE, which was later co-signed by the other federations who announced their support.

Russian journalist Evgeny Surov was denied accreditation and was not even allowed to enter the venue as a spectator. This led to protests by the Russian Chess Federation and more than 40 top players.