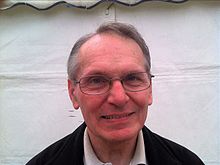 Iolo Ceredig Jones (born 2 August 1947) is a Welsh former international chess player born in Llandysul. He is notable as the co-author of the only Welsh language chess manual, A chwaraei di wyddbwyll?, which he wrote with his father, T. Llew Jones.

Jones was the joint Welsh champion in 1982-3. He competed for Wales at 14 consecutive Chess Olympiads between 1972 and 1998 and won a gold medal for his performance at the 1990 Olympiad at Novi Sad, Yugoslavia. In 2011 he took a break from retirement and participated in the European Team Chess Championship for the Welsh team.

He is also the brother of the political activist and writer, Emyr Llewelyn.