Harry Nelson Pillsbury (December 5, 1872 - June 17, 1906) was a leading chess player. At the age of 22, he won one of the strongest tournaments of the time (the Hastings 1895 chess tournament) but his illness and early death prevented him from challenging for the World Chess Championship.

Pillsbury was born in Somerville, Massachusetts, moved to New York City in 1894, then to Philadelphia in 1898.

By 1890, having only played chess for two years, he beat noted expert H. N. Stone. In April 1892, Pillsbury won a match two games to one against World Champion Wilhelm Steinitz, who gave him odds of a pawn. Pillsbury's rise was meteoric, and there was soon no one to challenge him in the New York chess scene. 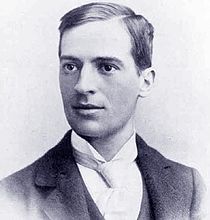 The Brooklyn chess club sponsored his journey to Europe to play in the Hastings 1895 chess tournament, in which all the greatest players of the time participated. The 22-year-old Pillsbury became a celebrity in the United States and abroad by winning the tournament, finishing ahead of reigning world champion Emanuel Lasker, former world champion Wilhelm Steinitz, recent challengers Mikhail Chigorin and Isidor Gunsberg, and future challengers Siegbert Tarrasch, Carl Schlechter and Dawid Janowski.

The dynamic style that Pillsbury exhibited during the tournament also helped to popularize the Queen's Gambit during the 1890s, including his famous win over Siegbert Tarrasch.

His next major tournament was in Saint Petersburg the same year, a six-round round-robin tournament between four of the top five finishers at Hastings (Pillsbury, Chigorin, Lasker and Steinitz; Tarrasch did not play). Pillsbury appears to have contracted syphilis prior to the start of the event. Although he was in the lead after the first half of the tournament (Pillsbury 6½ points out of 9, Lasker 5½, Steinitz 4½, Chigorin 1½), he was affected by severe headaches and scored only 1½/9 in the second half, ultimately finishing third (Lasker 11½/18, Steinitz 9½, Pillsbury 8, Chigorin 7). He lost a critical fourth cycle encounter to Lasker, and Garry Kasparov has suggested that had he won, he could well have won the tournament and forced a world championship match against Lasker.

In spite of his ill health, Pillsbury beat American champion Jackson Showalter in 1897 to win the U.S. Chess Championship, a title he held until his death in 1906.

Poor mental and physical health, the result of his syphilis infection, prevented him from realizing his full potential throughout the rest of his life. He succumbed to the illness in a Philadelphia hospital in 1906.

Pillsbury is buried in Laurel Hill Cemetery in Reading, Massachusetts.

Pillsbury had an even record against Lasker (+5−5=4), a feat matched or surpassed by few. He even beat Lasker with the black pieces at Saint Petersburg in 1895 and at Augsburg in 1900 (however this was an offhand game, not a tournament game):

Pillsbury was a very strong blindfold chess player, and could play checkers and chess simultaneously while playing a hand of whist, and reciting a list of long words. His maximum was 22 simultaneous blindfold games at Moscow 1902. However, his greatest feat was 21 simultaneous games against the players in the Hannover Hauptturnier of 1902 - the winner of the Hauptturnier would be recognized as a master, yet Pillsbury scored +3−7=11. As a teenager, Edward Lasker played Pillsbury in a blindfold exhibition in Breslau, against the wishes of his mother, and recalled in Chess Secrets I learned from the Masters :

But it soon became evident that I would have lost my game even if I had been in the calmest of moods. Pillsbury gave a marvellous performance, winning 13 of the 16 blindfold games, drawing two, and losing only one. He played strong chess and made no mistakes [presumably in recalling the positions]. The picture of Pillsbury sitting calmly in an armchair, with his back to the players, smoking one cigar after another, and replying to his opponents' moves after brief consideration in a clear, unhesitating manner, came back to my mind 30 years later, when I refereed Alekhine's world record performance at the Chicago World's Fair, where he played 32 blindfold games simultaneously. It was quite an astounding demonstration, but Alekhine made quite a number of mistakes, and his performance did not impress me half as much as Pillsbury's in Breslau.

Prior to his simultaneous chess exhibitions, Pillsbury would entertain his audience with feats of memory that involved accurately recalling long lists of words after hearing or looking at them just once. One such list, which Pillsbury repeated forward and backward, performing the same feat the next day, was:

Irving Chernev and Fred Reinfeld, in the Fireside Book of Chess, state that this list was devised by H. Threkeld-Edwards, a surgeon, and Prof. Mansfield Merriman, teacher of civil engineering at Lehigh University, Bethlehem, PA, who challenged Pillsbury in Philadelphia, PA, prior to an exhibition in 1896. (Other sources cite the location of the challenge as London, UK.)