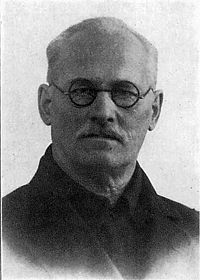 Alexey Alexeyevich Troitsky, or Alexei, or Troitzky (Russian: Алексе́й Алексе́евич Тро́ицкий) (March 14, 1866-August 1942) is considered to have been one of the greatest composers of chess endgame studies. He is widely regarded as the founder of the modern art of composing chess studies (Seirawan 2003:91). Troitzky died of starvation during World War II at the siege of Leningrad, where his notes were destroyed.

One of his most famous works involves analyzing the endgame with two knights versus a pawn, see Troitzky line. John Nunn analyzed this endgame with an endgame tablebase and stated that "the analysis of Troitsky ... is astonishingly accurate" (Nunn 1995:265).

Troitzky was a prolific composer of endgame studies. Irving Chernev included nine of them in his book 200 Brilliant Endgames. The diagram shows one of them.