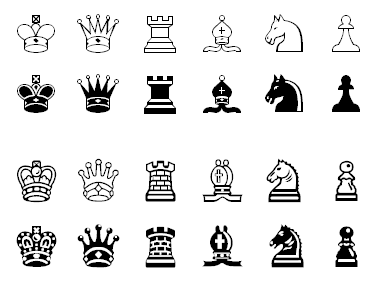 Chess symbols are part of Unicode. Instead of using images, one can represent chess pieces by symbols that are defined in the Unicode character set. This makes it possible to:

In order to display or print these symbols, one has to have one or more fonts with good Unicode support installed on the computer, and the document (Web page, word processor document, etc.) must use one of these fonts.

Chess symbols are part of the Miscellaneous Symbols block.