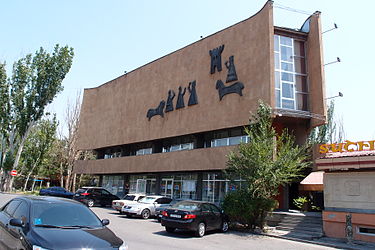 The Yerevan Chess House, founded in 1970 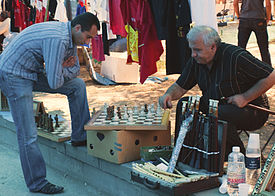 Chess has been played in Armenia since the early Middle Ages; however, it was institutionalized during the early Soviet period. Highly popular in Armenia today, chess gained widespread recognition during the 1960s, when Soviet Armenian grandmaster Tigran Petrosian became the World Chess Champion. A country of about three million people, Armenia is considered one of the strongest chess nations today. Among countries, Armenia has one of the most chess grandmasters per capita.

Since the country's independence, the Armenian men's chess team has won the European Team Championship (1999), the World Team Championship (2011) and the Chess Olympiad (2006, 2008, 2012). The women's team had its crowning victory at the 2003 European Championship. As of June 2014, Armenia ranks sixth in the world by the average rating of its top players. Levon Aronian, Armenia's best chess player, is currently world No. 9 in the FIDE rankings. Aronian was a World Champion candidate several times.

Since the 2011-12 school year, chess lessons have been made part of the curriculum in every public school in Armenia, making it the first country in the world to make chess mandatory in schools.

Until the early 20th century, chess was known in Armenian as čatrak (ճատրակ), from Middle Persian Chatrang. Today, that term - pronounced jadrag - is only used in Western Armenian, which is spoken in the Armenian diaspora. In modern Eastern Armenian, which is the variation of Armenian used in the Republic of Armenia, chess is known as šaxmat շախմատ . It is derived from Russian šáxmaty (шахматы), itself a derivative from Persian šâh mât (شاه مات), literally meaning "the king is at a loss."

In Shatrang: The Book of Chess (1936), orientalists Joseph Orbeli and Kamilla Trever suggest that chess was known in Armenia since at least the 9th century, when Armenia was under Arab rule. According to them, the game was brought to Armenia by the Arabs from India, where the game is believed to have been originated in the 6th century as Chaturanga. In 1967, chess figures were found in the citadel of Dvin, the medieval Armenian capital. Chess is mentioned in manuscripts from the 12th century-13th century kept in the Matenadaran Institute of Ancient Manuscripts in Yerevan, including a 13th-century manuscript by Vardan Areveltsi. Until the mid-20th century villagers in Shenavan near Aparan were using homemade chess figures similar to medieval ones.

Chess in Armenia was institutionalized after the establishment of Soviet rule in 1920. In 1926-27, by the initiative of chemist Simon Hovyan (1869-1942), sections about chess started appearing in many Armenian newspapers. Hovyan contributed to the popularization of chess in Armenia by giving lectures about it. He translated books by Emanuel Lasker, Ilya Maizelis (ru), and Yakov Rokhlin (ru) into Armenian. 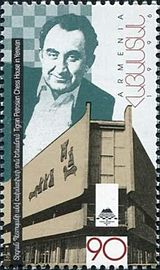 The first chess competitions were held in 1927, when the Armenian Chess Federation was founded. Until 1934 chess players from Armenia competed in the Transcaucasian championship. In 1934 the first Armenian Chess Championship was held in Yerevan. Genrikh Kasparyan became its winner. In later years Kasparyan won the championship nine times and became the most-titled Armenian chess player with ten national championship wins. The women's championship was also held the same year, Sirush Makints and Margarita Mirza-Avagian shared the champion title. The first Armenian chess club was founded in 1936. Chess clubs were also founded in Leninakan (now Gyumri) and Kirovakan (now Vanadzor) in the 1950s.

Chess became particularly popular with the unprecedented success of Tigran Petrosian in the 1960s. Born in Tiflis, the current capital of Armenia's neighbor Georgia, he started his ascent in Armenia with a 1946 victory at the national championship. He then won the Soviet champion title four times (1959, 1961, 1969, 1975). In 1963 Petrosian became the World Chess Champion, defeating Mikhail Botvinnik, another Soviet representative. Petrosian's victory not only popularized the game of chess, but also "led to an outpouring of patriotic fervour" in the smallest Soviet republic. "From that moment on, chess became a national obsession." Many couples named their sons Tigran, after Petrosian. Besides being World Champion for six years (1963 to 1969), Petrosian won the Chess Olympiad nine times with the Soviet team (1958 to 1974).

In 1962, there were 30,000 chess players in Soviet Armenia, as well as 3,000 instructors and judges. By 1986 the number of chess players had increased to 50,000, including three grandmasters: Rafael Vaganian, Smbat Lputian, and Arshak Petrosian. In the late Soviet period, Rafael Vaganian (1989) and Artashes Minasian (1991) became Soviet Champions. Vaganian also won the Olympiad with the Soviet team twice in 1984 and 1986.

In 1985, Garry Kasparov, born in Baku, Soviet Azerbaijan to an Armenian mother and Russian Jewish father, became World Champion. Although he never represented Armenia and is only half-Armenian, some sources preferred to call him Armenian, partly because his last name is the Russified form of his mother's Armenian last name Kasparyan.

Armenia gained its independence from the Soviet Union in 1991. Since then, Armenian chess players have had the opportunity to represent the Republic of Armenia. Three major chess tournaments have taken place in independent Armenia: the 32nd Chess Olympiad was held at the Sports & Music Complex in Yerevan in 1996; the 2001 World Team Chess Championship and the 2014 European Individual Chess Championship were held at the Yerevan Opera Theater.

Armenia earned its first medal at the 1992 Chess Olympiad, finishing third. Armenia won bronze medals at the 2002 and 2004 Olympiads as well. The Armenian team made a breakthrough with the sensational victory at the 2006 Chess Olympiad. They also won the 2008 and 2012 Chess Olympiads. Their record at the World Team Championships has been similarly outstanding, finishing third in 1997, 2001, and 2005, and winning in 2011. At the European championships the team performed somewhat more poorly, placing third in 1997, first in 1999, and second in 2007.

Teaching of chess in schools

In 2011, the Ministry of Education of Armenia made chess part of the primary school curriculum along with such standards as math and history for children over the age of 6. Chess is compulsory for second, third and fourth graders. Over $1.5 million was spent on the program. The inclusion of chess in schools was generally received positively by the public, but some parents claimed that their children's school program was already complicated and overloaded. Grandmaster Smbat Lputian argues that "bringing chess into schools is the best way to build the future."

The decision was widely reported in the international media. Journalists, chess experts and officials in various countries praised the program and advised its adoption in their respective countries. During his visit to Armenia in 2014 Magnus Carlsen stated: "I think Armenia's experience of teaching chess in schools is a great example for the whole world."

The national governing body for chess, the Armenian Chess Federation, was founded in 1927. President of Armenia Serzh Sargsyan was elected its president in 2004 (when he was Defence Minister) and was reelected in 2011. Sargsyan "is known for enthusiastically supporting Armenian chess players." On one occasion, Sargsyan stated that "We don't want people to know Armenia just for the earthquake and the genocide. We would rather it was famous for its chess." The Armenian government provides grandmasters with salaries and perks.

The Chess Academy of Armenia (Հայաստանի շախմատի ակադեմիա), "one of the leading chess-teaching institutions in the country", was "founded in 2002 in Yerevan by the initiative of grandmaster Smbat Lputian, supported by the Prime Minister Andranik Margaryan". The academy has organized international and national chess tournaments.

The first Armenian championship occurred in 1934 when it was part of the Transcaucasian SFSR. Championships were held sporadically in the Armenian SSR until 1945, when they became an annual event; this practice has been continued in independent Armenia. Genrikh Kasparyan has won it the most times (10 times), followed by Ashot Anastasian (8 times), Levon Grigorian (6 times) and Artashes Minasian (6 times).

The first woman's championship also took place in 1934, but was not held again till 1939. Some of the most notable women champions include Elina Danielian (6 times), Lilit Mkrtchian (4 times) and Siranush Andriasian (3 times).

The logo of Chess in Armenia magazine

In 1972, the magazine Chess in Armenia (Շախմատային Հայաստան Shakhmatayin Hayastan) was founded by Gaguik Oganessian. It was published monthly until 1997, when it became a weekly magazine. In 1972, the TV show Chess-64 (originally named Chess School) started to be aired by the Public Television of Armenia. Hosted by Gaguik Oganessian, it is the "longest lived program series" in the channel's history. Another more recently created show, Chess World, is aired after the First News.

The Top 10 Armenian grandmasters as of June 2014 are listed below.

Levon Aronian is currently No. 2 in the FIDE World Rankings, behind Magnus Carlsen. In 2005 he won the Chess World Cup.

The Top 10 women Armenian chess players are listed below as of August 2013. 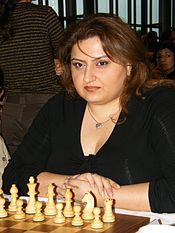 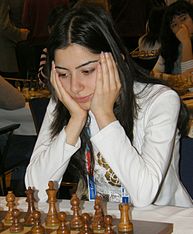 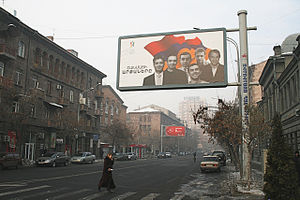 A billboard in central Yerevan celebrating Armenia's victory at the 38th Chess Olympiad. It shows members of the Armenian team with the caption "The Kings of Chess". 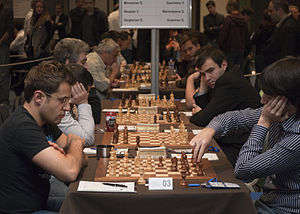 Armenia vs Azerbaijan at the 2011 European Team Chess Championship. Levon Aronian (left) and Teimour Radjabov (right) pictured in the foreground.